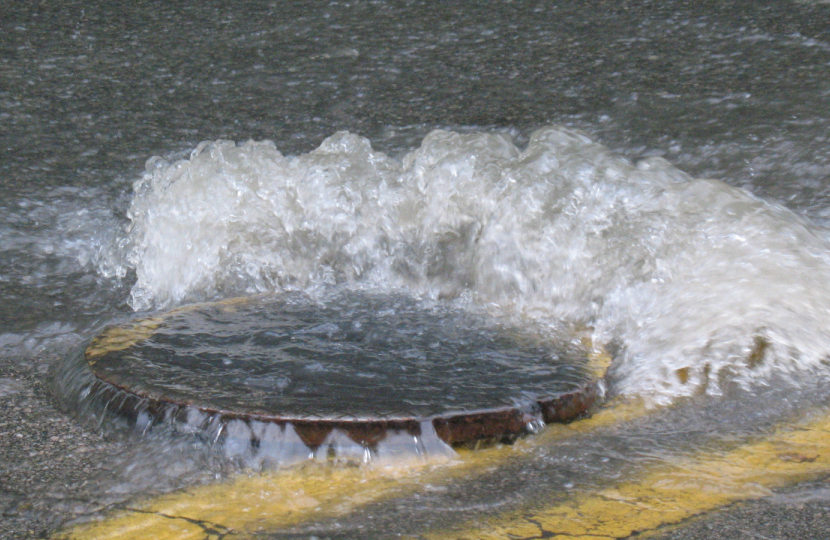 In recent weeks, we have seen flooding within Tandridge District, especially in Whyteleafe and Caterham. In Whyteleafe, homes along Godstone Road were flooded causing damage. In Caterham Valley, local shops in Church Walk Shopping Centre and homes in Harestone Valley Road were affected by flooding and in Caterham on the Hill, both Manor Avenue and Banstead Road were affected by flooding, with a drain bursting on Banstead Road between Eldon Road and Addison Road.

Godstone Road between Whyteleafe South Station and Wapses Lodge Roundabout was severely flooded with water not draining by the junction of Well Farm Road in particular. Residents' homes were also flooded along Godstone Road and Surrey Fire Service had to attend to the road to clear away flood water on the carriageway. Local Whyteleafe Conservatives were out helping residents affected by flooding and are concerned that not enough is being done by the local District and County Councillors to protect Whyteleafe residents from flooding and want to see more action to tackle flooding in Whyteleafe.

Cllr Taylor O'Driscoll, who represents Westway, worked with Caterham on the Hill Parish Council and Surrey County Council to ensure that the drain cover on Banstead Road was put back in place quickly, helped ensure cars did not hit the drain and supported residents who were affected by flood damage. However he feels that more needs to be done to ensure to protect Banstead Road from flooding.

He says "I know residents are concerned about flooding that took place in Banstead Road in recent weeks and I share these concerns. I believe the cause of this is due to a lack of drain resilience and the design of the pavement at the junction with Addison Road, which in heavy rain causes water to flow onto the Southern and Western side of Banstead Road, affecting the homes on that side of the road. The design of the pavement needs to be altered so that water doesn't flow into residents' homes and the drains need to be reengineered to ensure that they do not burst whenever it rains heavily.

Drain blockages also do not help the situation so I urge residents to report any blocked drains to Surrey County Council as soon as you notice it is blocked and if Surrey do not immediately act, contact your local Councillor."

We are the Caterham Hill Branch of East Surrey Conservative Association!

The Commonwealth, G7 and NATO Summits